The ability to express one’s views freely is a crucial aspect of a healthy society. For Palestinians, this right is often violated by the Israeli government, as well as Palestinian political parties, through directly silencing and suppressing free speech and stifling political and social activity more broadly. Many of the significant violations of freedom of expression experienced by Palestinians surround the Israeli historical narrative of its establishment and Israel’s attempt to quell discussion of the accompanying dispossession of Palestinians.

Today, freedom to express criticism about Israel’s actions and behaviour is severely restricted, and this extends to suppressing peaceful demonstrations and globally suppressing both scholarly and non-scholarly critique of Israel.

Israeli censorship policies are based on laws passed by the British Mandate government over Palestine before the establishment of the State of Israel in 1948. These historical regulations have been enhanced through the introduction of more recent laws, including legislation targeting organisations which play significant roles in civil society.1

In 2011, for example, the Knesset passed “The Law for the Prevention of Damage to the State of Israel Through Boycott.”2 This law penalises those who call for boycotting the Israeli state and its illegal settlements in the West Bank and Golan Heights. The law allows the Israeli finance ministry to revoke funding to organisations that call for boycotts.3 On an individual level, it criminalises anyone living in Israel or the occupied territories who peacefully opposes practices of Israel that are illegal according to international law. Since 2011, Israel has also cut funding from institutions that commemorate Nakba Day.4

A principal way in which Palestinians are deprived of their freedom of speech today is through the suppression of political demonstrations.5 Israeli forces regularly break up demonstrations by arresting and trying demonstration organisers in military courts, deporting foreign activists who participate in demonstrations, and closing demonstration zones. It is also common for peaceful Palestinian protestors to be physically attacked.

In the occupied Palestinian territories, the right to freedom of speech is also infringed upon by the Palestinian Authority (PA) and Hamas.6 Palestinian journalists are regularly detained and imprisoned for promoting what the PA or Hamas consider to be defamation, and the PA in particular targets online expression.

Violating the right to freedom of speech concerning Israel extends to a global level for Palestinians and non-Palestinians alike. Universities around the globe, particularly in the United States and the United Kingdom, are increasingly being censored in their criticisms of Israel. Academics are globally targeted, monitored and often dismissed from their positions for their support for Palestinian rights. 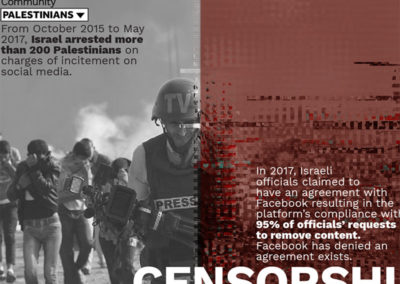 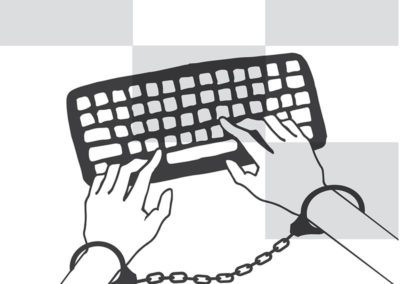 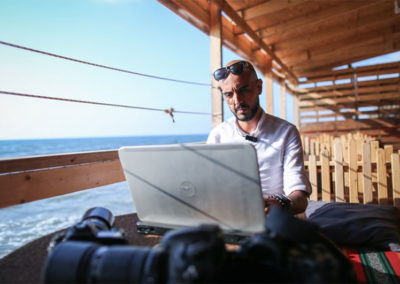 The Risk of Being a Journalist in Gaza